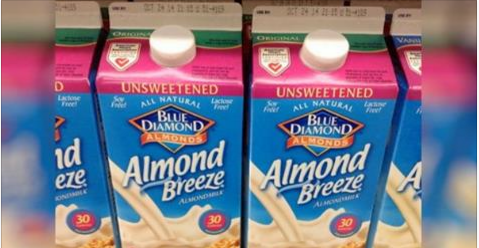 A handful of almonds is a healthy snack that will give you energy to tackle the rest of the day. They’re full of protein, antioxidants, beneficial phenols, flavonoids and healthy fats. Almonds are a wonderful food that adds nutrition to your everyday diet. But, as a milk alternative, store-bought almond milk is not as healthy as you may think. Many people shell out extra money for almond milk, as it is believed to be a healthy alternative to dairy. However, when you buy that carton – do you REALLY know what you’re getting?

Store-bought almond milk contains more additives, water and sweetener than actual almonds. In fact, the average carton of commercial almond milk contains just a handful of almonds! Researchers found that there was just 2 percent of almonds in the UK almond milk brand Alpro. The rest is made up of water, sweetener, carrageenan (a thickening agent), and and added A, E, and D vitamins.

To feed your body the nutrition it gets from a handful of almonds, you would need to drink an entire carton of almond milk, not just one or two glasses. This is also why the calorie count for a glass of almond milk is so low. At 30 calories per cup, compared to 160 calories for a serving of almonds, the commercial almond milk is mostly water. The nut milk is almost 4 dollars per half gallon as well, leaving little room to argue that store-bought almond milk is a great alternative for milk.

These facts are little known, as the almond milk industry continues to profit from year to year. In 2014, White Wave, a plant-based milk company, reported its first quarter sales had increased 50 percent over the previous year’s totals. As sales continue to grow for plant-based milk companies, the industry is expected to net 1.7 billion dollars in sales this year.

As an almond milk fan, you’ll need to distinguish if buying the nut milk really makes sense. The mixture of sweetener, a few almonds, water and additives isn’t great for your health – or your wallet. Making your own almond milk, however, is a great way to enjoy almond milk – without the additives! You can leave out the sweetener and other harmful additives, while adding in more almonds for a thicker, more nutritious milk.

Making the nut milk is simpler than you may think! You’ll only need an few ingredients and supplies. Try to find raw, organic almonds to use in your nut milk. Start by soaking one cup of almonds in water overnight. In the morning, blend the almonds with three cups of water with a heavy duty blender. Strain the nut milk through a cheesecloth and into a bowl or mason jar. It can keep up to three days stored in the refrigerator.

Here’s a full tutorial on how to make your own almond milk.

Next time you’re in the market for some nut milk, consider making your own! As you can see in the video, almond milk is very easy to make, as well as a lot healthier than the store bought milk. Don’t forget to include a little vanilla extract and cinnamon to your homemade almond milk to add even more flavor.